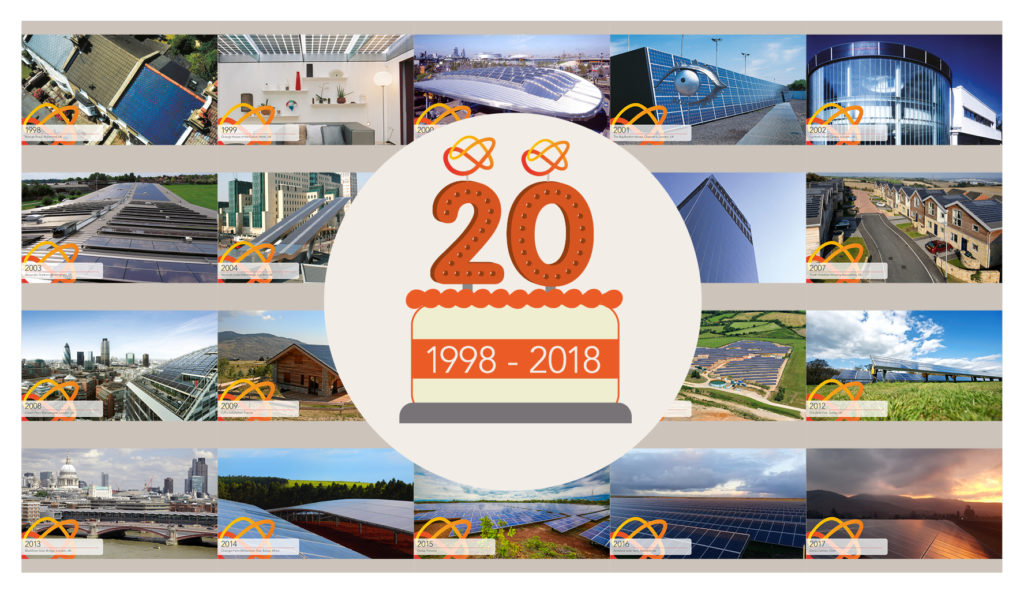 Britain’s fastest growing solar company, Solarcentury, has just turned 20, and continues to thrive thanks to its major global expansion.

Solarcentury is celebrating its 20th anniversary as one of the world’s most respected solar companies. Founded by former oil geologist Jeremy Leggett in 1998, it has grown into a major global player in the renewable energy sector, with business interests in the UK, Europe, Latin America and Africa.

Solarcentury’s solar panels sit on the roofs of tens of thousands of homes in the UK and it has an international pipeline of 3 gigawatts of projects. Last year it was named the fastest growing renewable energy company by the Sunday Times – thanks in part to a rapid international expansion programme.

Notably, Solarcentury has survived and thrived during the UK government’s multiple energy policy shifts over the last decade.

Flagship installations during its twenty years in the UK include Blackfriars Bridge – the world’s largest solar-powered bridge, where solar panels cover the roof, generating enough electricity to power half the station’s daily energy needs – as well as the Tate Modern, the Eden Project, the CIS Tower in Manchester, and the first Big Brother house! The company has also developed, built and operated large-scale solar farms across Latin America, Africa and Europe.

In recent years, Solarcentury’s business strategy has evolved around a full range of services aimed at multiple customer groups, including utility, commercial and residential – where success has been bolstered by partnerships with the likes of Ikea and Nissan in the UK and Europe.

“We’ve come a long way since the early days and our business strategy, combining a range of services with international expansion, has meant that Solarcentury survived in an environment where many other solar companies have struggled,” he said.

“I’m so proud to be a part of this company which has gone from strength to strength and is doing some incredible and innovative things around the world. I hope and believe that we will continue to be a driving, innovative force in the solar environment for many years into the future.”

Company founder Jeremy Leggett, told Solarcentury he was “proud, grateful, and lucky” to see the company he founded develop so successfully.

“It is an absolute rarity for a solar company to still be alive, let alone healthy, after 20 years in the brutal market that ‘the solarcoaster’ has been. The fact that we are still alive is down to the hard work, grit, and patience of literally hundreds of talented and committed people over the years,” he said.